Once upon a time, there was a little girl.

And she was a wise little girl.

But she was a strange little girl.

In a few weeks, she died.

I liked her. Didn’t you?

I am SO excited about this!

On June 10, 2014, Diana Gabaldon officially released the eighth major novel in her Outlander series. It is called “Written in My Own Heart’s Blood” – or what she calls “MOBY” for short.

I highly suggest you give the whole series a read! Don’t cheat yourself… start at the beginning of the series.

As mentioned in a previous post, my mother recently found some of my early writings from the age of about 7 years.

Reading them now, I’m struck by what a morbid child I was! So many stories involved my main character (usually a strange young girl) dying at the end. Or at least getting seriously injured.

It guess it makes sense that I became interested in Stephen King and Dean Koontz as I got older!

Still, I have a feeling I was working through something tragic. At around that time, we lived in Denver, Colorado. There was a boy my age that went to my school. He lived just down the street.

He died from leukemia. His name was Ricky Knight. Although my mother’s parents died when I was too young to really understand what was happening, this was the first time I had encountered death up close and personal. And it wasn’t the death of a pet, or something “normal.”

It was the death of a child. My own age. I was shocked. I had no idea that such a thing could even happen.

I can only imagine I must have been trying to process this unbelieveable thing through my stories.

My next post will be one of those stories.

To parse out the title for you:
Sexually Dimorphic – meaning that there were obvious differences between the males and females.
Tridimensionally Preserved – the eggs were 3-D (not flatened).

Pterosaurs are not to be confused with Pterodactyls, though they are similar looking creatures. 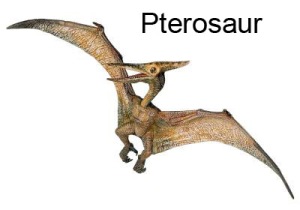 Excellent post at Writer’s Digest on the arduous (but eventually rewarding!) process of sharing your writing with the rest of the world via traditional publication:

Are you ready for it?